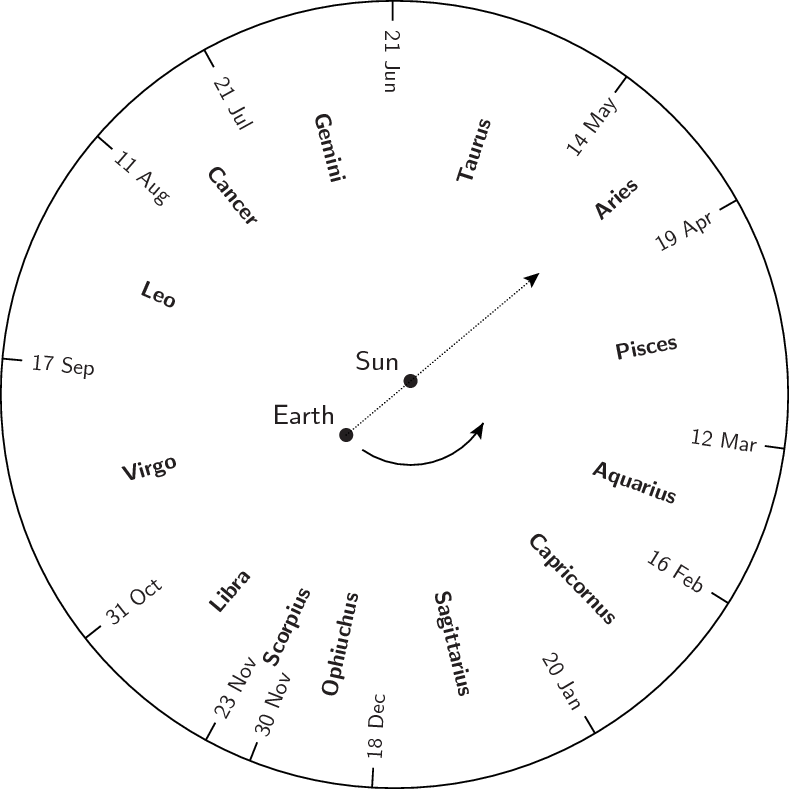 As the Earth orbits the Sun, our line of sight towards the Sun passes through the thirteen constellations of the zodiac.

The ecliptic is the path that the Sun follows through the constellations each year as the Earth's seasons change, also known as the zodiac.

The exact times when the Sun passes from one constellation into the next can vary by a few hours from one year to the next, occurring roughly six hours later each year before shifting back in the fourth year when a leap day is inserted into the calendar.

The table below lists the dates when the Sun passed through each constellation along its path in the year 2010. This is a suitably 'average' year, since it was the midpoint between two leap years.

Differences from the ancient zodiac

In astrological calendars, the Sun is said to pass through the twelve signs of the zodiac on dates which are around a month earlier than those given above. These dates are the ones usually used to work out star signs.

Around 2000 years ago, these dates matched up with the actual position of the Sun on any given day, but over the centuries they have grown out of date, for two reasons.

More importantly, an effect called the precession of the equinoxes means that the Earth's the rotation axis slowly changes over time. Although the north pole currently points towards the pole star, Polaris, in Roman times it was closer to the star Kochab, and in 12,000 years time, it will be close to the star Vega.

The Sun's path across through the constellations is invariant over millions of years, but as the north pole moves, so too do the positions of the solstices and equinoxes along the line of the zodiac.