Phases Of The Moon

Phases Of The Moon

The Moon's phases cycle once every 29.53 days, and arise due to its orbital motion around the Earth. This motion causes the Moon to move eastwards through the constellations at a rate of 12° per day – more than one Moon-width each hour.

At new moon, for example, the Moon appears closest to the Sun, and it rises and sets with the Sun. This means that it is only visible during the daytime, although in practice it is quite invisible for around three days as it is hidden by the Sun's glare.

The Moon completes one orbital circuit around the Earth every 27.3 days – a period called a sidereal month. But the Moon's phases repeat on a slightly longer period, since they are determined by the relative positions of the Sun and Moon in the sky. The Sun itself moves by about 30° each month, and so after each circuit, the Moon takes a further two days to catch up with the distance the travelled by the Sun over the course of the month.

As a result, it takes the Moon 29.53 days – a period called a synodic month – to travel from one new moon, when it makes close approach with the Sun, to the next new moon.

The monthly cycle of phases

In the days following new moon, the Moon emerges from the Sun's glare to the east of the Sun, rising and setting a few hours behind the Sun. This means that it is visible for much of the day, but also for a short time after dusk.

A week after new moon, the Moon rises and sets roughly six hours behind the Sun, having completed a quarter of a circuit through the constellations. The Moon is said to reach first quarter.

Continuing eastwards, a week later the Moon lies almost opposite to the Sun in the sky. This is full moon, when the Moon is visible for almost all of the night. It rises as the Sun sets, and sets as the Sun rises.

The Moon's eastward journey then carries it closer to the Sun again, approaching the Sun from the west. At this time it rises in the middle of the night, and is visible in the morning sky.

How the phases arise

At all times, the Sun illuminates exactly half of the Moon's surface. The side of the Moon facing the Sun is illuminated, while the side facing away from it lies in darkness.

Likewise, exactly half of the Moon's surface is turned towards the Earth. But the half we see is not the same half that is illuminated by the Sun. 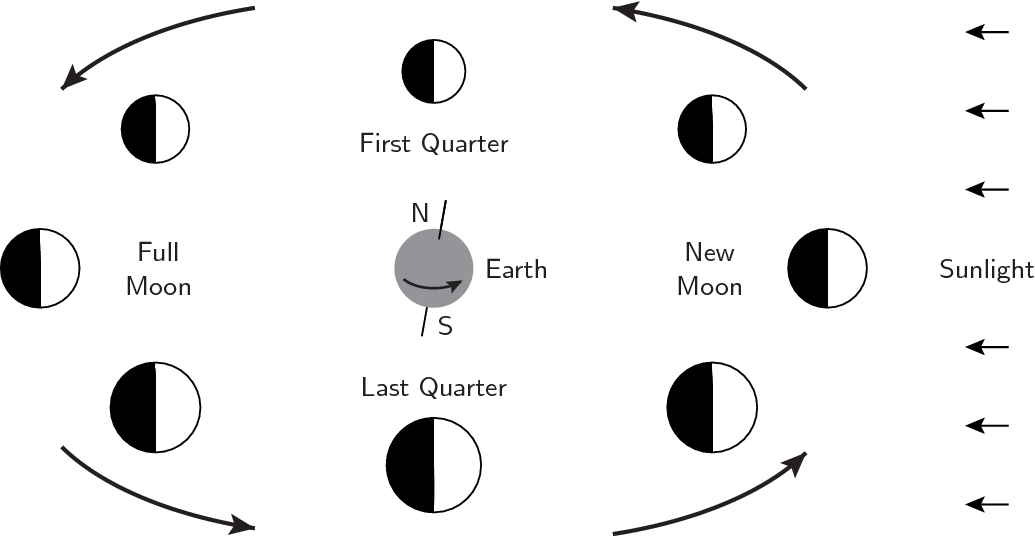 At new moon, when the Moon passes between the Sun and Earth, we see almost exactly the opposite side of the Moon to that illuminated by the Sun. As a result, the Moon appears entirely unilluminated at new moon.