This very evident difference in their observed path across the night sky has meant that Mercury and Venus have been understood since pre-historic times to be in some way different from the other planets.

As the inferior planets orbit the Sun, they pass alternately in front of and behind it – events which are termed inferior and superior conjunctions respectively. On such occasions they are almost completely unobservable because they are so close to the Sun in the sky that they are completely lost in its glare.

They are visible for longest at those times when they are furthest away from the Sun in one or other direction; at such times, they are said to be at either greatest western elongation or greatest eastern elongation, depending whether they appear to the west or to the east of the Sun.

Phases of Mercury and Venus

Mercury and Venus show phases akin to those of the Moon. For example, when they pass between the Earth and the Sun – at inferior conjunction – we exclusively see those parts of their surfaces which are directed away from the Sun and are therefore unilluminated.

As they pass behind the Sun – at superior conjunction – we exclusively see those parts of their surfaces which are also directed towards the Sun and are therefore illuminated.

At both such times, they are generally too close to the Sun to be observed, and at the times when they are well separated from the Sun in the sky – at greatest elongation east or west – we see an intermediate phase. 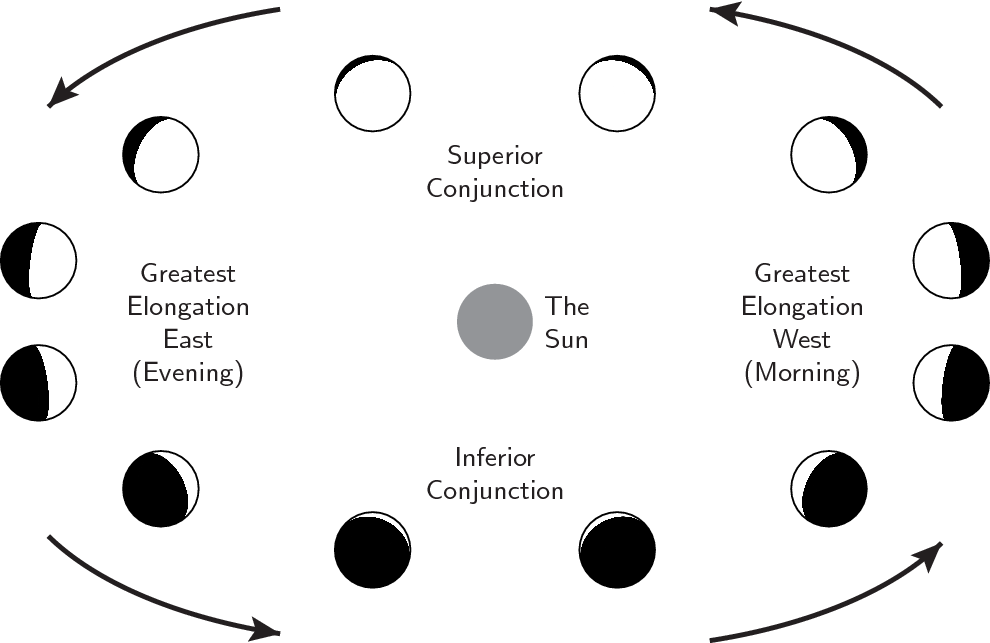