Mars orbits the Sun once every 1.9 years, but only comes to opposition once every 2.1 years. Image courtesy of NASA/HST.

The synodic period of an astronomical body is the period of time over which its observability cycles, with durations varying from a few months to just over two years.

Technically, it can be defined as the interval between the times when the object passes around the far side of the solar system, such that the Sun lies between us and it. This configuration is termed superior solar conjunction, and means the object is unobservable for a few days or weeks owing to being very close to the Sun in the sky.

The pattern in the observability of an object over the course of each synodic period depends on its distance from the Sun.

If the planet is further from the Sun than the Earth, then it is optimally placed for observation when it lies on the same side of the solar system to the Earth. When the Sun and Earth lie in an approximately straight line with the object being observed, with the Earth in the middle, the object appears in almost exactly the opposite part of the sky to the Sun. This configuration is known as opposition, and means the object is visible almost all night.

Within each synodic cycle, the planet disappears into the Sun's glare once at solar conjunction. Half a cycle later, it is visible for much of the night when it reaches opposition.

The cycle is different for planets which are closer to the Sun than the Earth – specifically, for Mercury and Venus.

When Mercury or Venus lie on the same side of the solar system to the Earth, they do not pass opposite to the Sun in the sky, but instead come close to passing between the Earth and Sun. Rather than appearing high in the night sky, they disappear into the Sun's glare. This configuration is termed inferior solar conjunction. In rare cases of very exact alignment, the object can pass directly in front of the Sun, creating a transit.

Between the times when the inner planets pass in front of or behind the Sun, they appear alternately in the evening or morning skies, depending whether they lie to the east of the Sun – setting shortly after sunset – or to the west of the Sun – rising shortly before sunrise. Consequently, they have two apparitions within each synodic cycle.

They never venture very far from the Sun: Venus's maximum separation from the Sun is 48°, while Mercury's is 28°.

The planets each have different synodic periods. This is partly because they orbit the Sun at different speeds. The inner planets feel a stronger gravitational pull from the Sun than the outer planets, and have to circle the Sun faster to remain in orbit.

Matters are further complicated because our own planet is also moving. The observability of a planet depends specifically on how often it overtakes the Earth in its orbit, rather than how fast it goes around the Sun as a hypothetical observer outside the solar system would see it.

The time interval between successive oppositions or solar conjunctions of a planet depends not on how fast it goes around the Sun, but specifically on how often it overtakes the Earth in its orbit. 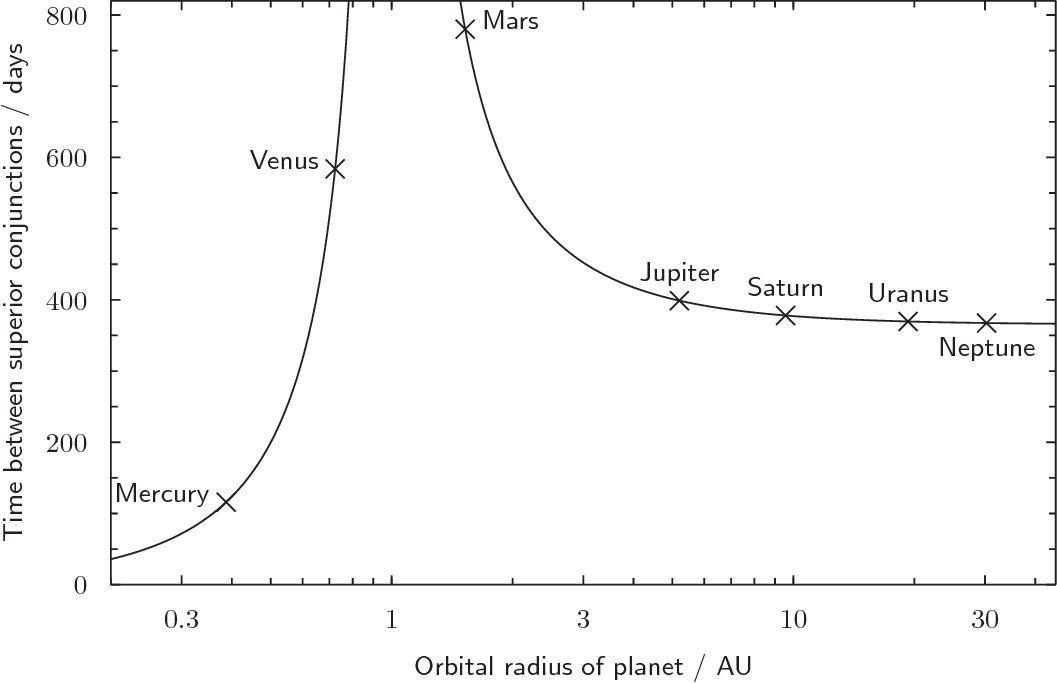 The plot above shows the theoretically-calculated synodic periods of planets in circular orbits around the Sun, as a function of their distance from the Sun.

The outermost planets in the solar system, for example, move very slowly around their orbits. Each time the Earth completes an orbit, these planets have not moved very far from where they were a year earlier. As a result, the Earth overtakes them roughly once a year. The movement of these planets between the morning and evening skies happens primarily because of the Earth's movement around its orbit, rather than their own.

At the opposite extreme, Mercury circles the Sun once every 88 days, after which time the Earth has completed less than a quarter of a revolution. Mercury overtakes the Earth every 116 days, the additional 28 days being needed for it to catch up with the Earth's own orbital progress in the intervening time.

The equation for this is as follows: