A pinhole camera for observing the 2012 transit of Venus

A novel way to observe the transit of Venus 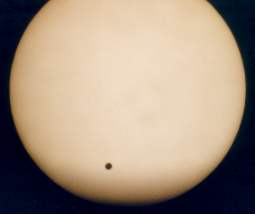 Photograph of the 2004 transit of Venus, seen through a 4-inch telescope with solar filter. 9h30m UT.

On 6th June 2012, Venus will do a rare thing: it will pass in front of (transit) the Sun. It does so only twice each century, in pairs of events separated by eight years – its last transit was on 8th June 2004, but the next won't be until 2117. This year, it will mostly be amateur astronomers who will be watching the transit, but historically this was not the case: in eighteenth and nineteenth centuries, observing a transit of Venus was one of the most accurate ways to determine Venus's distance from the Earth, and from that the scale of the Solar System.

However, any events which involves observing the Sun – not just transits, but also solar eclipses and the appearance of large sunspots – pose unusual problems for astronomers. Most astronomical objects are desperately faint; the Sun, on the other hand, is quite bright. For once, astronomers need to take safety precautions: staring directly into the Sun can cause permanent eye damage within seconds.

Using a purpose-designed solar filter, widely available from planetariums or the British Astronomical Association – never attempt to make one yourself – it is possible to see Venus and/or large sunspots with the naked eye. They appear as small blotches, but little more. To fully appreciate them, some magnification is wanted, but may be expensive to achieve. The Sun's light is much more dangerous when magnified, and expensive filters must to be fitted to any telescope. Given the risks, it is simply not worth cutting corners or taking risks.

I had the good fortune to observe the 2004 transit with Cambridge engineer Hugh Hunt, who had come up with a novel and very cheap solution to this dilemma, by setting up an unusual design of pinhole camera, rather like a camera obscura. Normally, pinhole cameras consist of a darkened box, illuminated only by light entering through a small hole in the front. A picture of a scene can be built up on a piece of photographic film at the back of the box because light rays passing through the pinhole in different directions hit the film in different places. However, instead of a pinhole, Hugh used a small mirror. And, although Hugh's projection unit was especially designed for the transit, he argues that it's also ideally suited for observing eclipses and sunspots as it's cheap, safe, and ideal for large group observing. 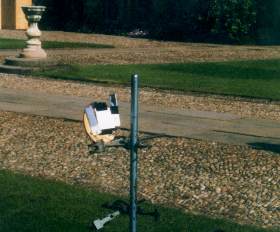 Instead of using a pinhole, Hugh used a small mirror to project light into the darkened room (labelled version of photo available below).

Why use a mirror? Conventional pinhole cameras work well for widefield imaging of bright subjects, where it doesn't matter that they don't collect much light. However, for observing the Sun, they have some practical problems. Seen in the sky, the Sun measures only half-a-degree across, and would cast a very small image in a pinhole camera. Moreover, the image will be blurred on length scales smaller than the size of the pinhole, owing to light travelling through different parts of the hole. In short, in order to see Venus as a small dot on the Sun's disk, the pinhole must be smaller than the size that Venus is expected to appear in the projected image. To produce an image of the required sharpness, either a very small hole is needed, or projection over a very long distance to increase the size of the projected image. The latter works best, as very small pinholes produce very faint images.

In line with these calculations, Hugh decided to project an image of the Sun onto a screen 30 metres away from his "pinhole", which was a few millimetres across. Simple trigonometry shows that such a setup produces an image of the Sun measuring 30cm across, and with an angular resolution of 20 arcseconds. By comparison, Venus measures around 57 arcseconds across when it transits the Sun, and so should be visible in the projection. 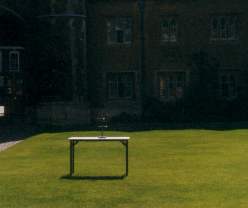 Looking down the barrel of the pinhole camera, projecting into a darkened room (labelled version of photo available below).

However, a thirty-metre darkened pinhole camera would be rather large and unwieldy to set up. Instead, Hugh used a small piece of mirror attached to a retort stand. The mirror took the role of the pinhole, deflecting the Sun's rays towards a projection screen. In practice, getting a mirror only a few millimetres across is quite tricky, so Hugh punched a small circular hole in a sheet of paper and placed it over a larger mirror to create the size of aperture he wanted. This directed the Sun's rays in through a small crack in the curtains of an otherwise darkened room in which the image could be viewed.

The only part of set up which was a little tricky was lining up the projected image onto the screen in the darkened room. As the Sun moved across the sky, this had to be regularly repeated. The problem was that, because the aperture was small, the image it produced was faint and difficult to see when working in broad daylight. To ease the process, Hugh used a second larger aperture, around 2cm across, which was fixed at the same tilt angle as the small aperture. This was large enough to produce an image which could be seen in daylight, and could used as a guide.

As the images below show, the results were remarkably successful. Hugh is keen to point out that the set up was incredibly cheap and easy to put together, and that it avoids all of the normal hazards of observing the Sun. There is no danger, either of anyone inadvertently looking directly into the Sun, or even of getting sunburn. Moreover, it is ideal for large groups, since many people can gather around the projection screen. Aside from observing the transit of Venus and eclipses, it is also ideal for observing sunspots on any day of the year.

For more information, see Hugh Hunt's own webpage, which has many more photos of his setup. In case you're in search of more procrastination, you may be interested in Hugh's observations of how amorous pigeons can stop a one-hundred-year-old clock (live information here), his recreation of the Barnes Wallace Bouncing Bomb, his modelling of why Frank Lampard can rightly feel cheated, or any of the other things on his homepage.