Mars is currently emerging from behind the Sun. From Fairfield, it is visible in the dawn sky, rising at 02:56 (EDT) – 2 hours and 32 minutes before the Sun – and reaching an altitude of 19° above the eastern horizon before fading from view as dawn breaks around 04:46.

Mars, as seen by the Hubble Space Telescope in 2001. Image courtesy of NASA.

Mars is the fourth planet from the Sun, orbiting at a distance of 1.52 AU once every 687 days.

In the night sky, Mars appears with a distinctly red color, which is apparent even to the unaided eye. This is the result of a high abundance of iron oxide – better known as rust – in its soil.

Through a telescope, Mars's surface is a dull red color, though its polar regions often appear to have a markedly whiter hue. Its surface features appear as subtle dark markings on its surface, whose brightness contrasts are often easier to see with the help of color filters.

The table below lists apparitions of Mars around the year 2022, computed from NASA's DE430 planetary ephemeris. To show events around other years, use the control below.

Apparitions of Mars around 2022

Mars comes to opposition once every 780 days (2.1 years) – its synodic period. Because it lies close to the Earth in the solar system, its distance from the Earth varies dramatically over this 780-day cycle.

When the two planets are next to one another in their orbits – the moment when Mars appears at opposition, their separation can be less than 0.4 AU.

By contrast, when the two planets are opposite one another in the solar system – the moment when Mars appears at solar conjunction – their separation can exceed 2.6 AU.

As a consequence, the size of Mars's disk also changes dramatically: at solar conjunction it is a small and distant speck measuring only 3.5 arcseconds across, while at opposition it measures up to seven times that size.

As Mars passes opposition, its distance from the Earth changes most rapidly. As the Earth overtakes it, the two planets are only alongside each other for a couple of weeks. The Earth need only be a few degrees ahead of or behind Mars for the separation of the two planets to be significantly larger than at the moment of opposition. The chart below shows how Mars suddenly glides close to the Earth, before receding back to its usual distance just as quickly. 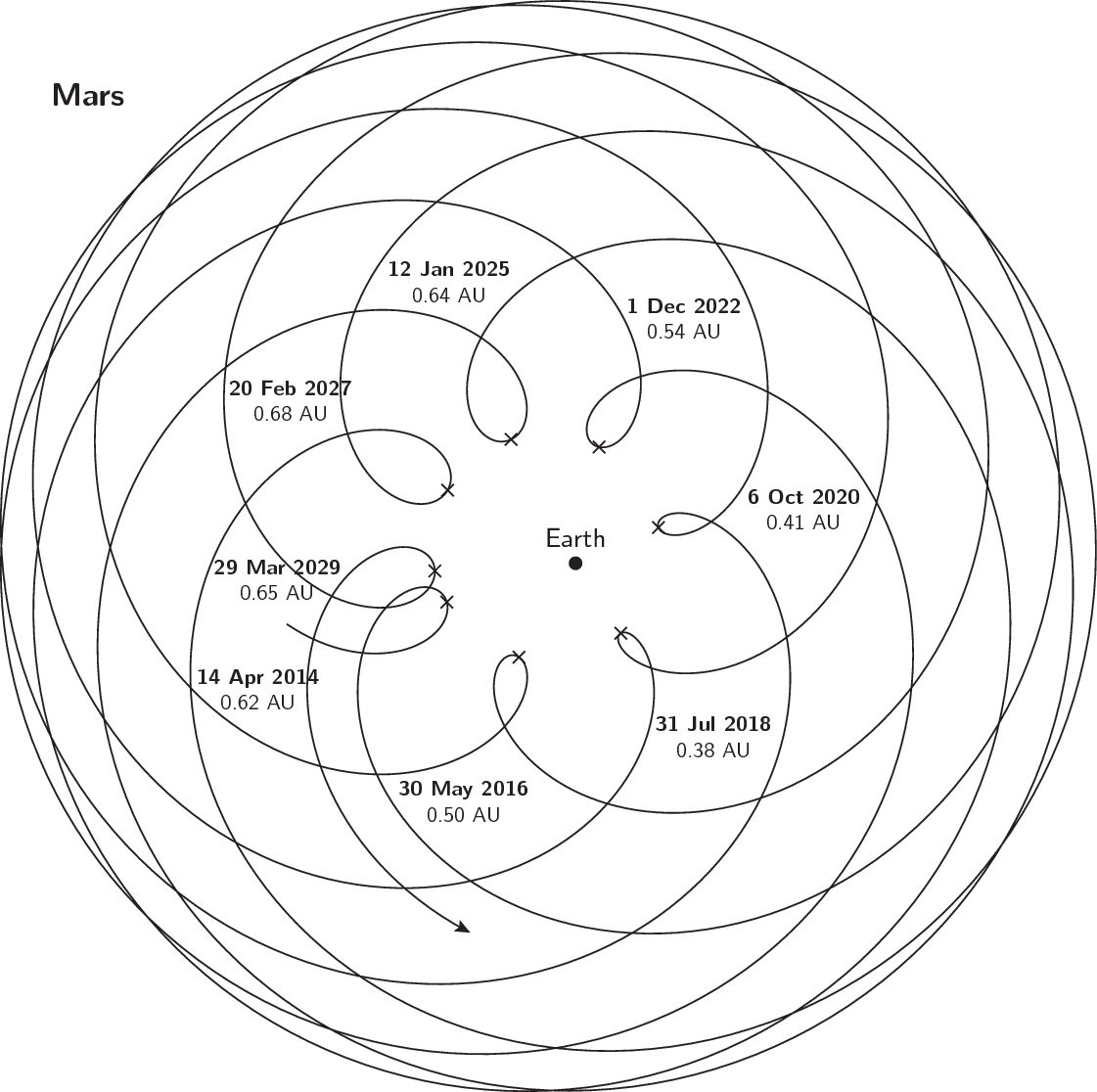 The position of Mars relative to the Earth, at the centre of this chart. The closer Mars is to the Earth, the larger it appears. Mars is closest to the Earth when at opposition; the dates of several oppositions are shown, together with Mars's distance from the Earth on each occasion.

Mars has the second most elliptical orbit of the solar system's planets. Its distance from the Sun varies between 1.38 and 1.67 AU.

This elliptical path means that Mars's closest approaches to the Earth do not always bring it to exactly the same distance from the Earth. When an opposition occurs at any given time of year, Mars – by the definition of an opposition – must lie immediately alongside the part of the Earth's orbit where the Earth is found at that time of year.

For example, whenever Mars comes to an opposition in late August, it is always at roughly the same point along its orbit, next to where the Earth lies every year in late August. It so happens that this point is very close to the position where Mars makes its closest approach to the Sun – its perihelion. This also brings it closer to the Earth than is possible at any other time, and it may briefly come within a distance of 0.4 AU of us. 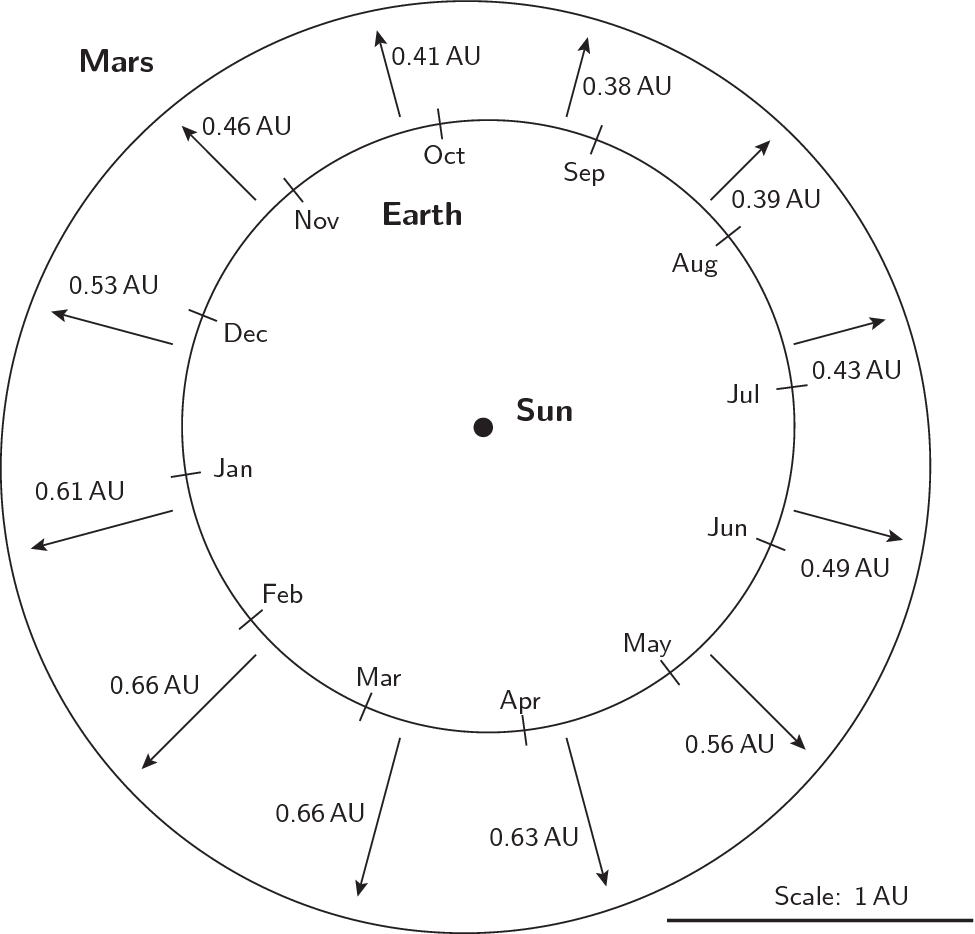 The chart below shows the time of year of all of Mars's oppositions between the years 2000 and 2120, together with the distance and angular size that Mars will have at the time, measured on the vertical axis. 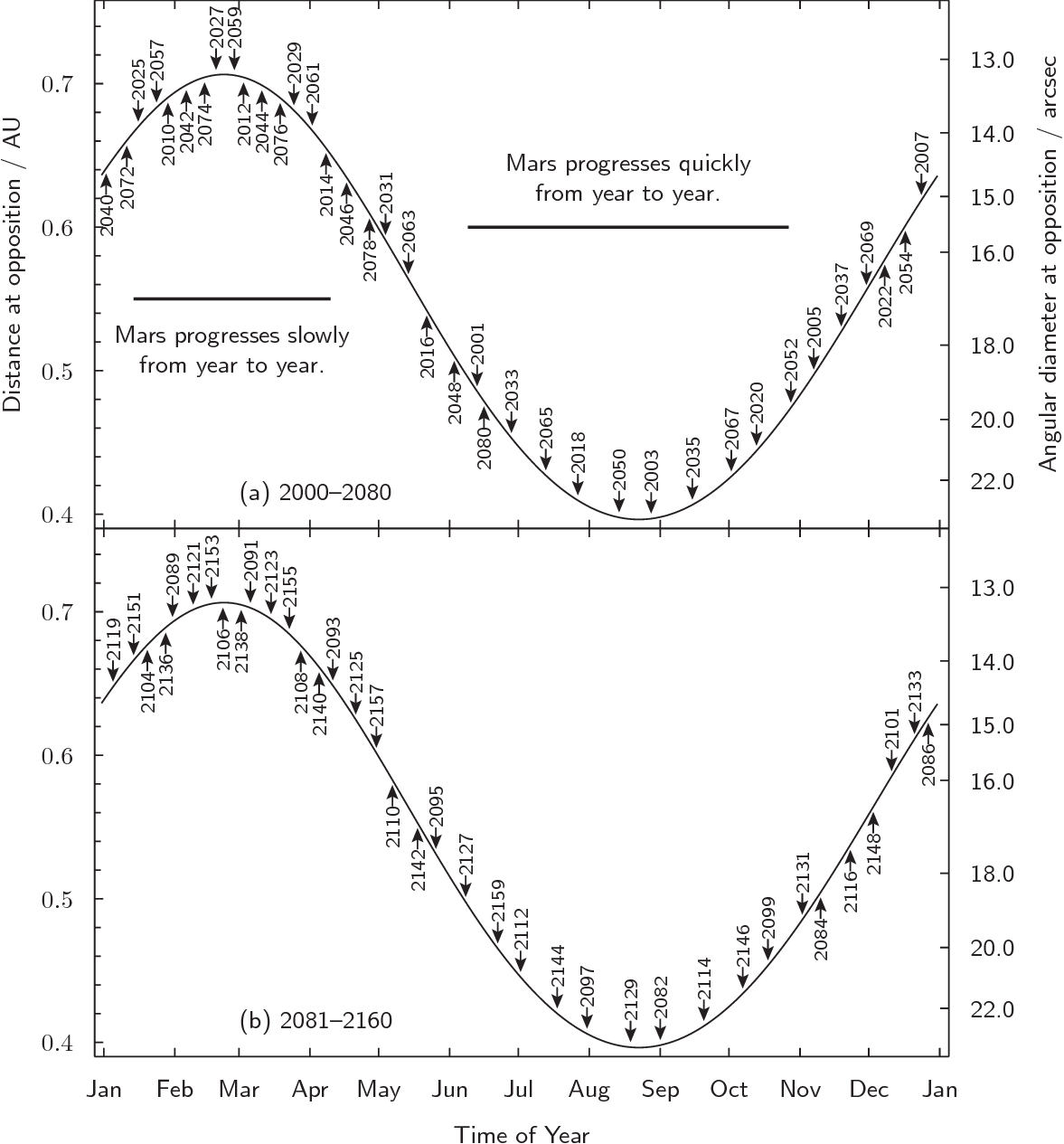 The chart below shows the declination of Mars at each of the oppositions above: 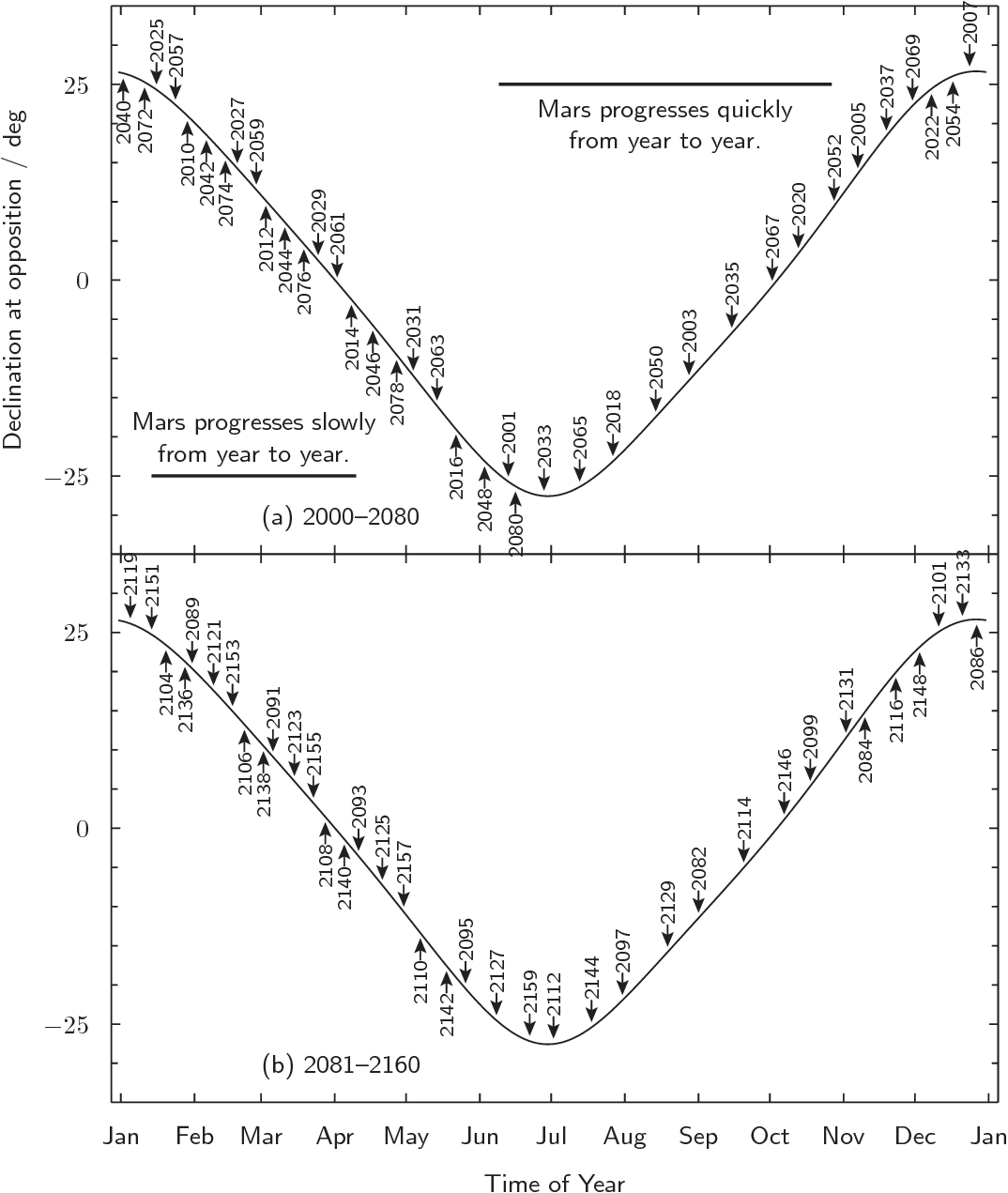 Mars rotates on its axis once every 24.5 hours, meaning that each day on Mars – commonly termed a sol – is only slightly longer than a day on Earth.

This has the frustrating consequence that almost the same face of Mars is turned to the Earth at any given time of day on successive days. To observe both sides of Mars within a short period requires either observing at widely separated times of night, or a wait of many days.

Mars has two small moons, Phobos and Deimos, which were discovered by Asaph Hall in 1877; they are named after the sons of Mars in Greek mythology.

Both are very small – less than 25 km across – and are very challenging objects to observe as they orbit very close to Mars.

It is thought unlikely that they formed at the same time as Mars. They are probably in fact asteroids which have been captured into orbit around the planet. Phobos orbits so close to Mars that it feels strong tidal forces which will probably rip it apart within the next 50 million years.

More spacecraft have been sent to Mars than to any other planet – as of 2018, 43 in total.

This large number can primarily be attributed to Mars' proximity to the Earth, putting it within comparatively easy reach for interplanetary probes, as well the interest of its solid and possibly habitable surface.

The success rate of these spacecraft has been very low, however. Of the 43 launched, only 24 have ever returned any useful data. Many of the unsuccessful spacecraft were Russian missions, launched in the late Soviet era.