Saturn will soon pass behind the Sun at solar conjunction. From San Diego, it is not readily observable since it is very close to the Sun, at a separation of only 9° from it.

Saturn, as seen by the Cassini spacecraft from orbit around it. Image courtesy of NASA.

Saturn is the sixth planet from the Sun, orbiting at a distance of 9.58 AU once every 29.5 years.

It is the solar system's second largest and most massive planet after Jupiter, with a mass of over 95 times that of the Earth, but less than a third that of Jupiter.

Its radius is 9.4 times that of the Earth, but like the other gas giants it rotates at phenomenal speed, completing one revolution every 10.57 hours.

The table below lists apparitions of Saturn around the year 2023, computed from NASA's DE430 planetary ephemeris. To show events around other years, use the control below.

Apparitions of Saturn around 2023

Saturn is undoubtedly best known for the system of rings which encircle the planet. These give Saturn perhaps the most iconic appearance of any of the planets.

The most obvious feature within the rings is the dark Cassini Division, which lies between the B- and A-rings and is striking even under poor seeing conditions. Under closer inspection, the rings show marked color and brightness contrasts which are much more apparent than any shown by the disk of the planet itself.

As of 2018, the planet is tilted with its northern hemisphere towards us, and the northern polar region on display. The rings are open wide, showing their northern side, and will continue to be well placed for the next 3–4 years.

Like the other gas giants, Saturn does not have a solid surface and is comprised almost entirely of gas, though it may have a small solid core at its center.

Within this gaseous atmosphere there are thick clouds of tiny solid crystals, predominantly of ammonia. It is these clouds which make Saturn opaque and determine its visual appearance.

Unlike Jupiter, however, these clouds are not strongly colored. While Saturn does have dark belts and bright zone, their color contrast is quite subtle in comparison to the corresponding features on Jupiter.

From time to time, cyclonic storms in Saturn's atmosphere manifest themselves as bright spots on the planet's disk.

Where it lies in the sky affects how easily it can be observed from the northern or southern hemispheres, and because, by definition, it lies almost directly opposite the Sun at opposition, there is a close relationship between the time of year when Saturn comes to opposition, and how well placed it is for observation.

Conversely, if Saturn is at opposition in December, it is sure to be high in the northern sky.

Because Saturn comes to opposition at almost the same time of year in successive years, this means that it remains in the northern or southern sky for a decade at a time. For example, it has currently been in the southern sky since 2011, and will remain poorly placed for northern observers until at least 2020.

The chart below shows the time of year of all of Saturn's oppositions between the years 2000 and 2115, together with the declination that Saturn will have at the time, measured on the vertical axis. 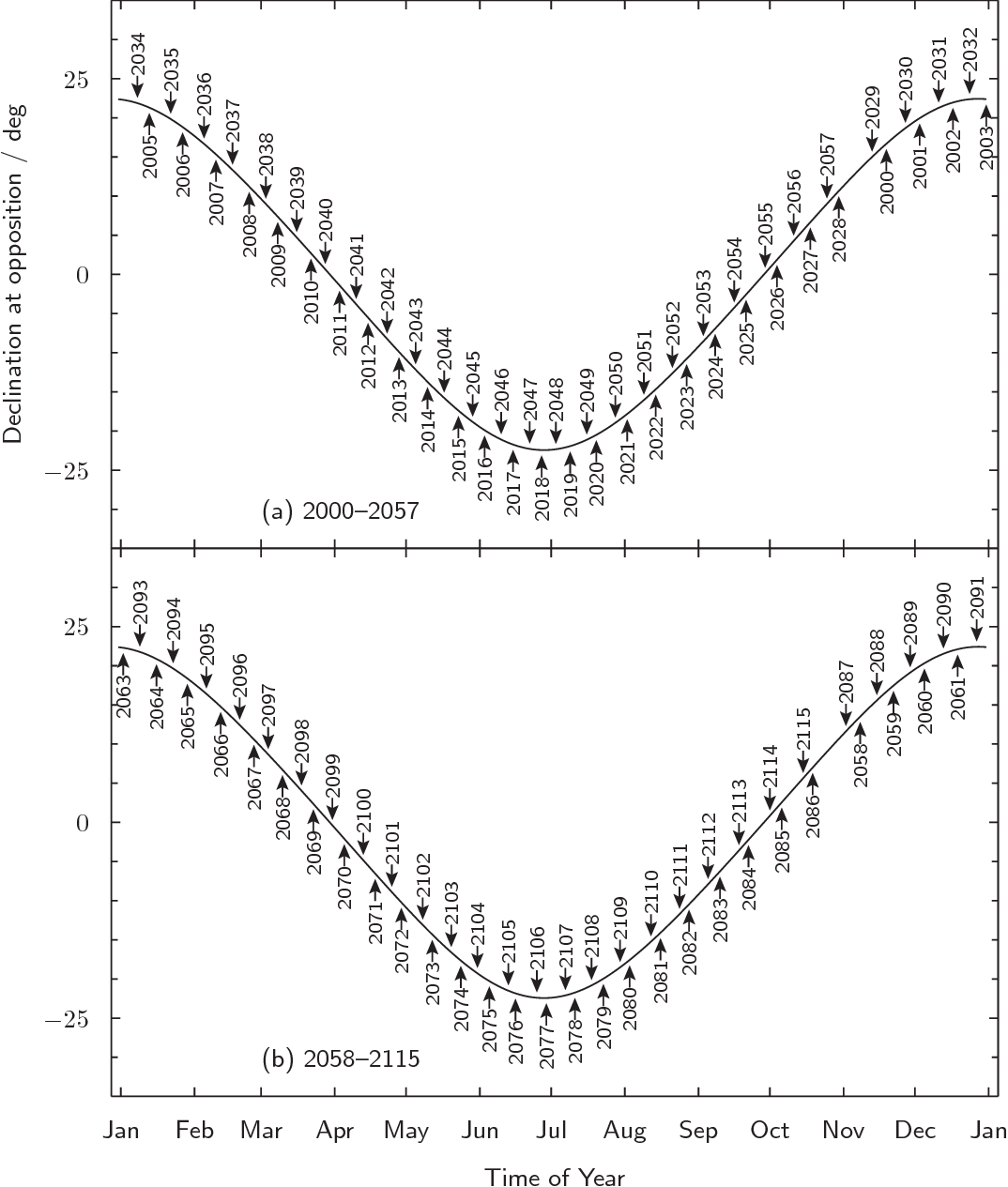