Uranus recently passed opposition. From Fairfield, it is visible in the evening sky, becoming accessible around 17:34 (EST), 32° above your eastern horizon, as dusk fades to darkness. It will then reach its highest point in the sky at 21:34, 64° above your southern horizon. It will continue to be observable until around 02:36, when it sinks below 21° above your western horizon.

Uranus is the Solar System's second outermost planet, orbiting the Sun at a distance of 19.2 AU once every 84.3 years.

The table below lists apparitions of Uranus around the year 2022, computed from NASA's DE430 planetary ephemeris. To show events around other years, use the control below.

Apparitions of Uranus around 2022

Uranus was unknown to ancient astronomy, and was the first planet to be discovered in the telescopic era, by William Herschel in 1781.

Herschel was not the first to have seen it, however. Several earlier observations have been identified where Uranus was mistakenly thought to be a star, and its position recorded on star charts. Among the observers who made such pre-discovery observations is John Flamsteed, who gave Uranus the designation 34 Tauri.

At magnitude 5.6, Uranus is just within reach of the naked eye from exceptionally dark locations far away from any artificial lighting, but only under very clear skies. Through a modern telescope it is easily resolvable into a disk measuring 3.8" across.

Like the other gas giants, Uranus does not have a solid surface and is comprised almost entirely of gas. It may well have a liquid core at its centre, however.

Within this gaseous atmosphere there are thick clouds of tiny solid crystals, predominantly of ammonia. It is these clouds which make Uranus opaque and determine its visual appearance.

The predominant components of Uranus's atmosphere are hydrogen and helium, similar to the atmospheres of Jupiter and Saturn. However, Uranus also has substantial quantities of water, ammonia, methane, and other hydrocarbons. It is these that give rise to Uranus's liquid core, and also give it its blue hue.

Where it lies in the sky affects how easily it can be observed from the northern or southern hemispheres, and because, by definition, it lies almost directly opposite the Sun at opposition, there is a close relationship between the time of year when Uranus comes to opposition, and how well placed it is for observation.

Conversely, if Uranus is at opposition in December, it is sure to be high in the northern sky.

Because Uranus comes to opposition at almost the same time of year in successive years, this means that it remains in the northern or southern sky for decades at a time.

The chart below shows the time of year of all of Uranus's oppositions between the years 2000 and 2160, together with the declination that Uranus will have at the time, measured on the vertical axis. 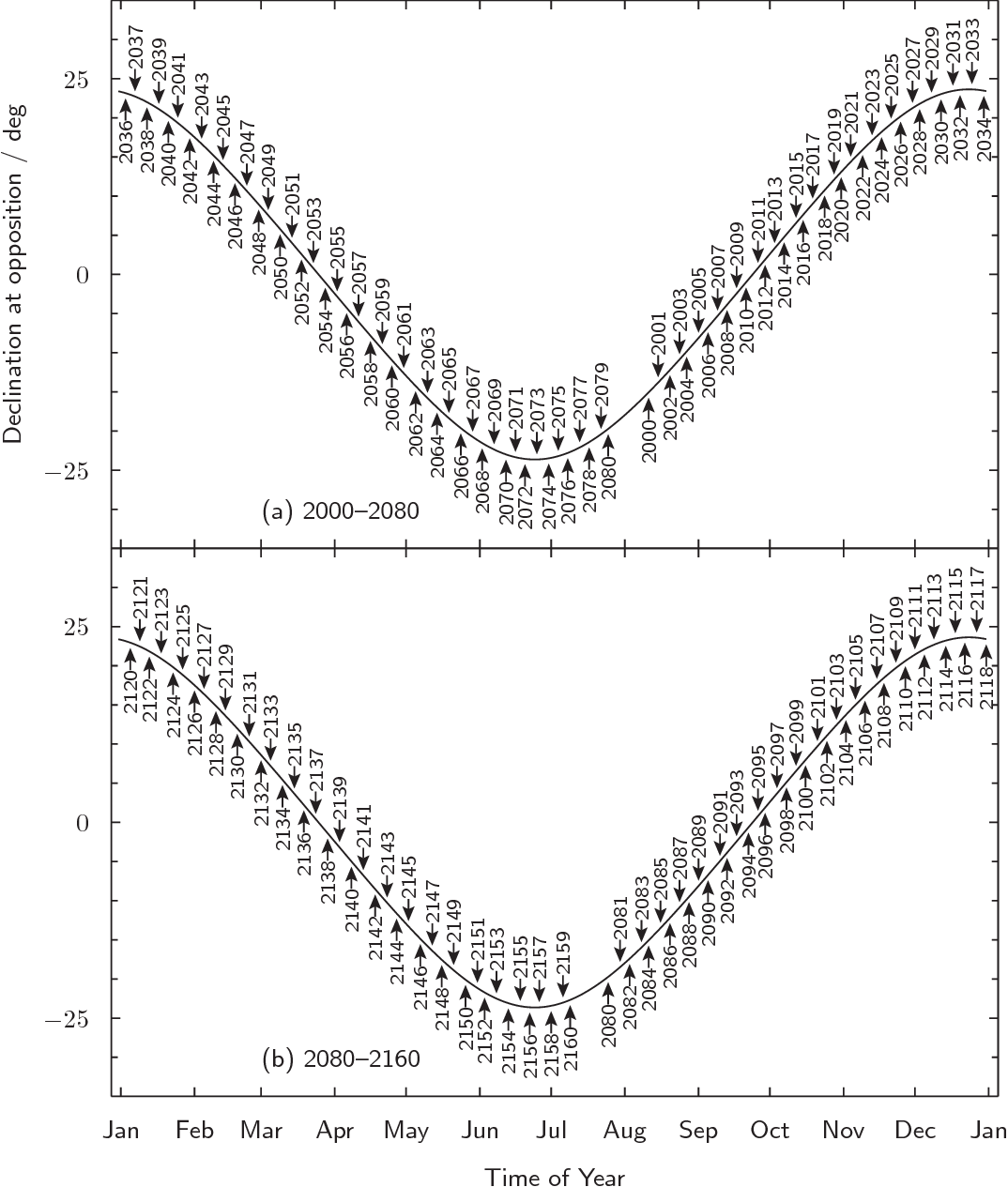