Jupiter will soon pass behind the Sun at solar conjunction. From San Diego, it will become visible around 17:41 (PST), 42° above your south-western horizon, as dusk fades to darkness. It will then sink towards the horizon, setting 3 hours and 49 minutes after the Sun at 21:14.

Jupiter, as seen by Cassini when it passed the planet on its way to Saturn. Image courtesy of NASA.

Jupiter is the fifth planet from the Sun, orbiting at a distance of 5.20 AU once every 11.86 years.

The table below lists apparitions of Jupiter around the year 2023, computed from NASA's DE430 planetary ephemeris. To show events around other years, use the control below.

Apparitions of Jupiter around 2023

Jupiter is a gas giant planet, composed mostly of hydrogen and helium. It does not have a solid surface and is comprised almost entirely of gas, though it may have a small solid core at its center.

Within this gaseous atmosphere there are thick clouds of tiny solid crystals, predominantly of ammonia. It is these clouds which make Jupiter opaque and determine its visual appearance.

These clouds are highly varied in color, meaning that Jupiter's disk has the greatest color contrasts of any of the planets. The pale-colored bright zones represent up-wellings of warm material, and the clouds tops of these zones are at higher altitude than those of the darker belts that separate them.

The dark belts appear to comprise of cooler sinking material, and it is believed that their deep red color stems from the interaction of the Sun's ultraviolet light with molecules dredged up from deeper within Jupiter's atmosphere by convection currents. While chemists refer to these molecules as chromophores, this is merely a generic term for any brightly colored compound, and the precise chemical composition of the chromophores present in Jupiter's atmosphere is not well understood.

The planet's rapid rotation drives weather systems which mean these rising and sinking regions predominate at alternate latitudes, in much the same way that the Earth's trade winds form. This creates Jupiter's familiar striped sequence of bands.

Jupiter's large angular size of up to 55" is rivalled only by Venus, and makes its disk quite apparent even through a modest pair of binoculars.

Its rapid rotation, however, makes long-exposure imaging tricky. Modern image-stacking software such as AutoStakkert not only use lucky imaging – selecting frames from long video sequences with the best atmospheric conditions – but also correct for the fact that the planet may have rotated over the course of the observation.

Jupiter comes to opposition once every 399 days – its synodic period.

Where it lies in the sky affects how easily it can be observed from the northern or southern hemispheres, and because, by definition, it lies almost directly opposite the Sun at opposition, there is a close relationship between the time of year when Jupiter comes to opposition, and how well placed it is for observation.

Conversely, if Jupiter is at opposition in December, it is sure to be high in the northern sky.

The chart below shows the time of year of all of Jupiter's oppositions between the years 2000 and 2120, together with the declination that Jupiter will have at the time, measured on the vertical axis. 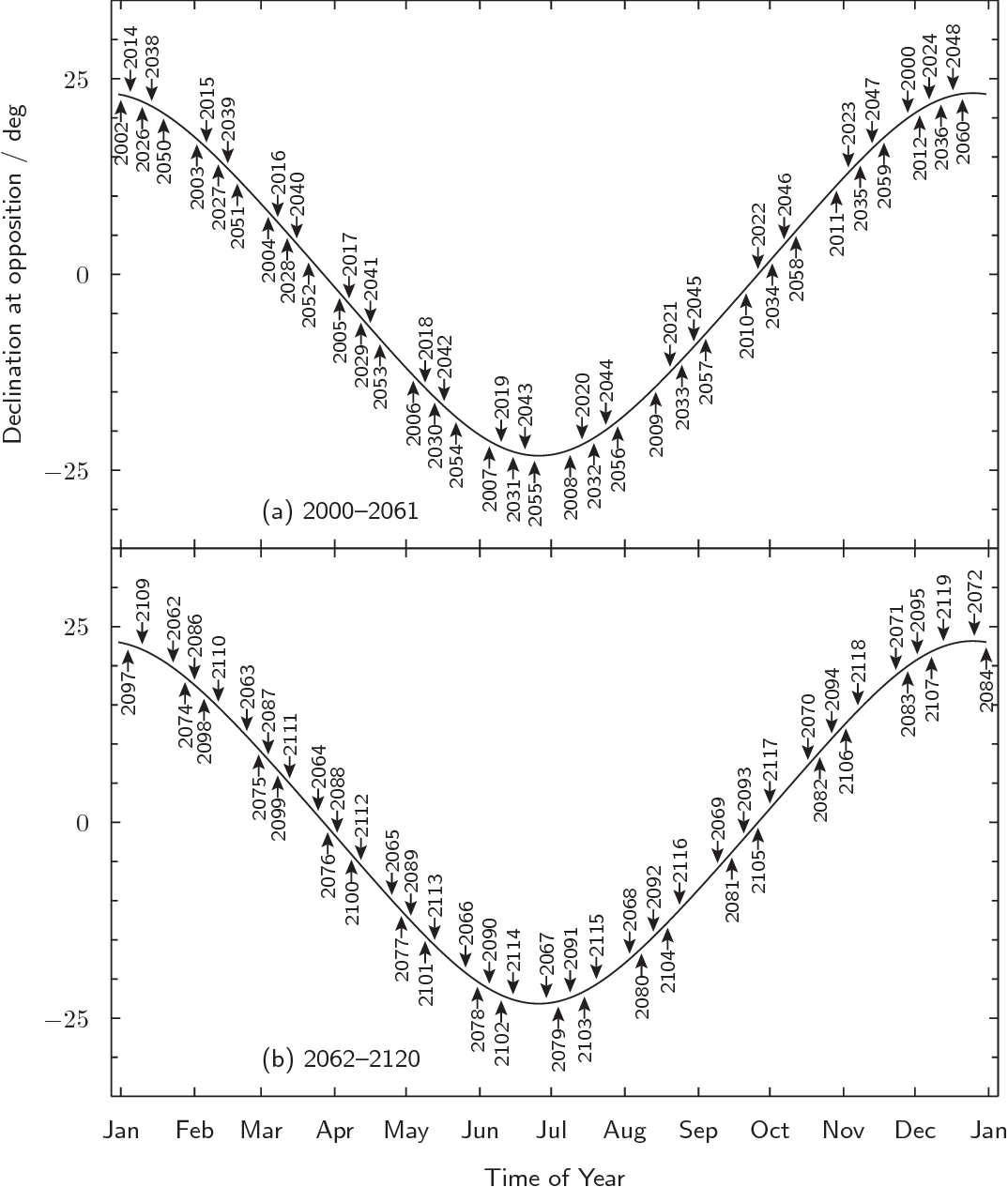