Neptune is currently emerging from behind the Sun. From Fairfield, it is not observable – it will reach its highest point in the sky during daytime and is no higher than 13° above the horizon at dawn.

Neptune is the outermost known planet in the Solar System, orbiting the Sun at a distance of 30.1 AU once every 164.8 years.

In the night sky, Neptune is a faint object. At magnitude 7.7, it is well beyond the reach of the naked eye, but given good seeing conditions it is fairly easy to distinguish through any telescope as a small extended disk measuring 2.5" across.

The table below lists apparitions of Neptune around the year 2022, computed from NASA's DE430 planetary ephemeris. To show events around other years, use the control below.

Apparitions of Neptune around 2022

Neptune was the second planet to be discovered in the telescopic age, in 1846. The first was Uranus, discovered telescopically by William Herschel in 1781, meanwhile all of the planets out to Saturn had been known since prehistory.

The discovery of Neptune was made by Johann Gottfried Galle of the Berlin Observatory, who noted its extended disk and movement across the sky from one night to the next.

The discovery of Neptune is often seen as the greatest achievement in the history of celestial mechanics, because the planet's presence was predicted before it was seen.

A year before its discovery, two mathematicians, Urbain Le Verrier and John Couch Adams, had studied the orbit of Uranus and observed that it showed significant deviations from the elliptical path which Newton's laws dictated it ought to follow. One way to explain these was the presence of another massive planet nearby, exerting a gravitational distortion its orbit.

So good were the predictions made by Le Verrier and Couch Adams, that when Galle found Neptune, it lay a mere one degree from the position predicted, though this was largely due to good luck: there were in fact substantial inaccuracies in Le Verrier's workings.

At around the same time, Le Verrier's also noted that Mercury's orbit showed similar anomalies, and he used the same logic once again, proposing another hypothetical planet, dubbed Vulcan, which orbited even closer to the Sun than Mercury.

This time Le Verrier was to be disappointed, and Vulcan was never found. The puzzling anomalies in Mercury's orbit remained unexplained until Albert Einstein showed that Mercury's orbit lies sufficiently close to the Sun for relativistic effects to become apparent.

Neptune has only ever been visited once by one spacecraft: the Voyager 2 probe flew past it in August 1989.

Where it lies in the sky affects how easily it can be observed from the northern or southern hemispheres, and because, by definition, it lies almost directly opposite the Sun at opposition, there is a close relationship between the time of year when Neptune comes to opposition, and how well placed it is for observation.

Conversely, if Neptune is at opposition in December, it is sure to be high in the northern sky.

Because Neptune comes to opposition at almost the same time of year in successive years, this means that it remains in the northern or southern sky for decades at a time.

The chart below shows the time of year of all of Neptune's oppositions between the years 2000 and 2150, together with the declination that Neptune will have at the time, measured on the vertical axis. 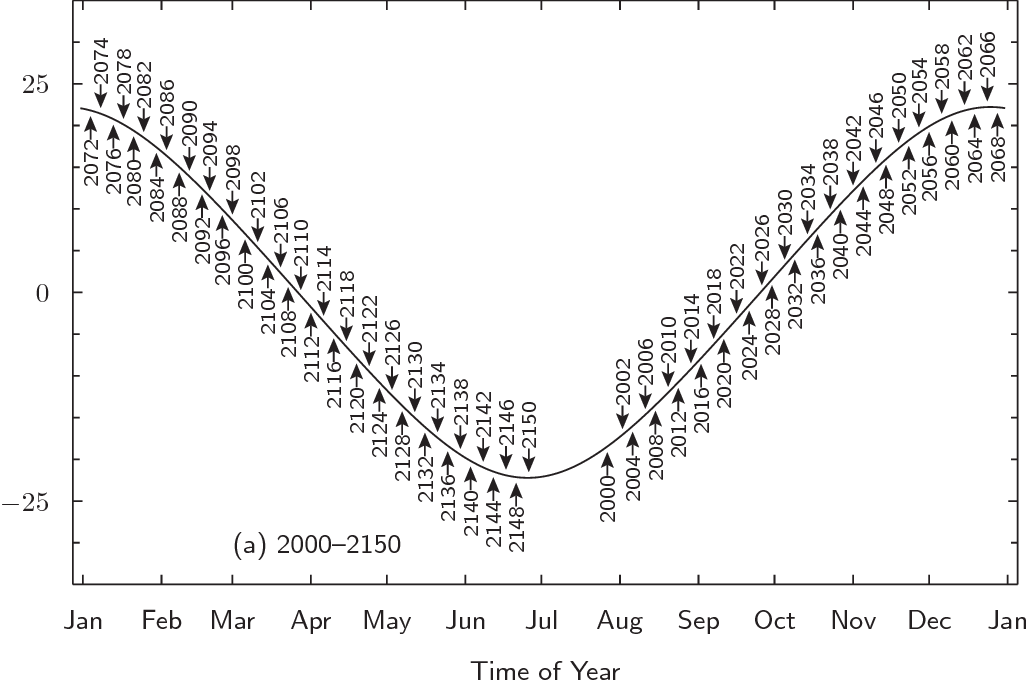