Make your own astrolabe - 9. Extreme Astrolabes 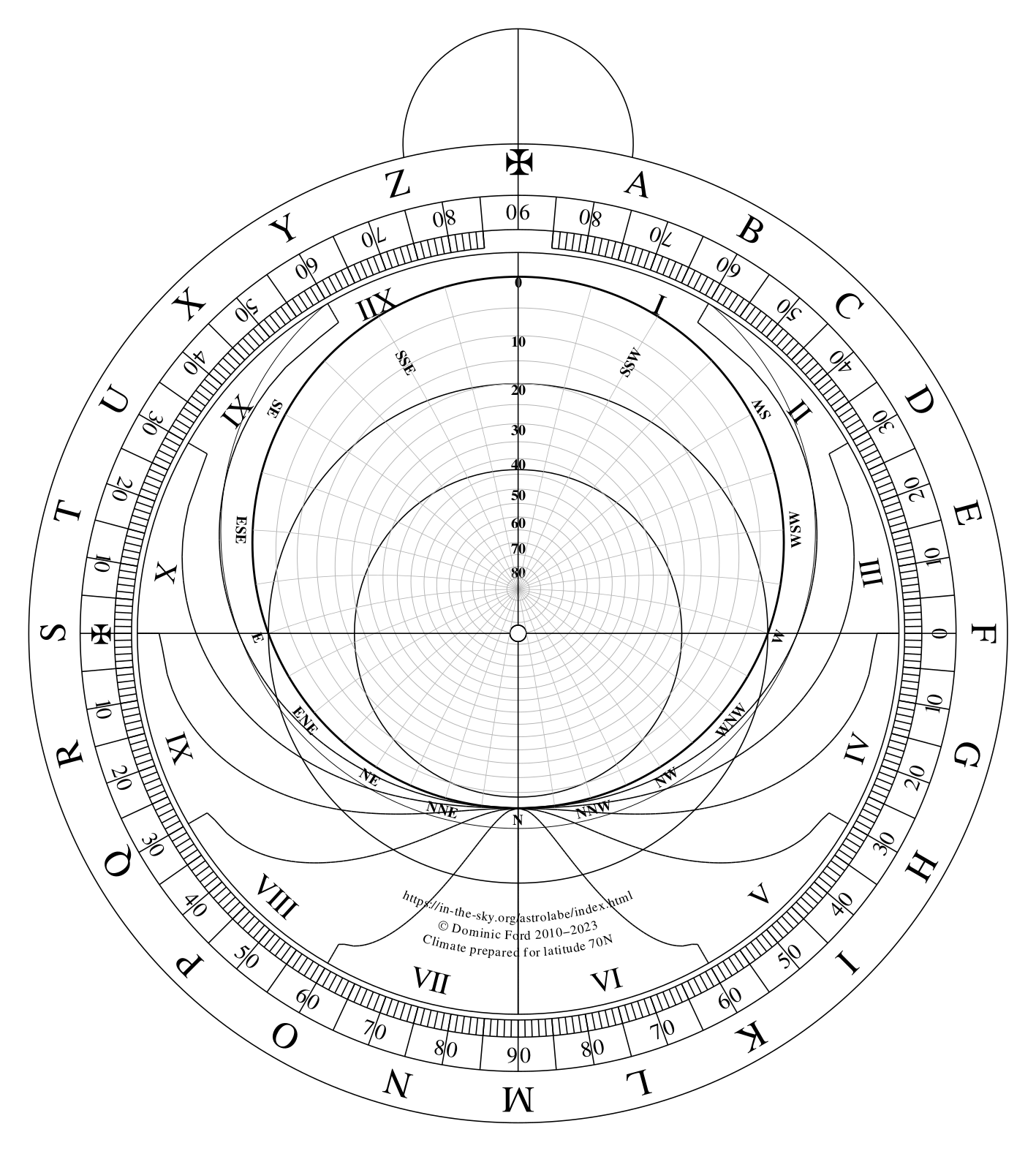 An extreme astrolabe, designed for a latitude of 70°N. Click to enlarge.

The model astrolabe presented on these web pages is available with customisations for use at any latitude between 85°N and 85°S, sampled at 5° intervals, with an additional astrolabe at 52°N for use in northern Europe.

Such an innovation would have been quite alien to the medieval users of astrolabes, who would have considered a pilgrimage of a few hundred miles to be a treacherous undertaking, and many of whom would never have ventured more than a few miles from home.

In particular, the notion of a southern-hemisphere astrolabe would have seemed absurd in medieval times, but I nonetheless provide them for the curiosity of southern readers.

The astrolabe described by Chaucer is designed to work at moderate-to-high latitudes, and of course only covers the northern hemisphere. The sky is only mapped as far south as the Tropic of Capricorn (declination 23°S), and the southernmost portion of the sky is omitted altogether   which is unsurprisingly since some of these constellations were not charted until the sixteenth century.

The planispheric projection used in the star charts on these astrolabes works best at moderate-to-high latitudes, where few if any stars below declination 23°S are visible. At latitudes closer to the equator, large portions of the visible sky are missing.

South of the equator, I have reversed the projection and placed the southern celestial pole at the centre of the astrolabe. This means that scale of right ascension also need to be reversed, as the whole sky has effectively been turned upside-down.

In order that the sequence of Roman letters around the rim of the front of the mother should still represent twenty-four equal hours, their direction is also reversed on southern astrolabes.

Within the Arctic and Antarctic circles, another problem is encountered: the system of unequal hours becomes ill-defined since the Sun never sets. In the climates provided for such latitudes, I have arbitrarily chosen a definition such that polar days or nights are divided into twelve equal hours between successive midnights.

This definition interfaces smoothly with the lengths of the unequal hours on the days at the start and end of the long periods of polar darkness or continuous sunshine. On these days, the Sun only spends a few minutes above (or below) the horizon, and so the unequal hours of the day (or night) are very short.