Venus recently passed in front of the Sun at inferior solar conjunction. From Ashburn, however, it is visible in the dawn sky, rising at 04:09 (EDT) – 1 hour and 40 minutes before the Sun – and reaching an altitude of 15° above the eastern horizon before fading from view as dawn breaks around 05:31.

Venus is the second planet from the Sun, orbiting at a distance of 0.723 AU once every 224 days.

It is our neighbour in the solar system, orbiting just inside the Earth's orbit. It is of a similar size to the Earth – around 95% of an Earth-width across – and has similar abundances of chemical elements such as carbon. For this reason, Venus is often considered to be the Earth's 'twin' planet.

Even though Venus orbits closer to the Sun than the Earth, its surface receives less heat from the Sun since it is permanently enshrouded by thick cloud layers. These reflect so much sunlight back into space that they more than compensate for the increased intensity of the Sun's light. They also make it virtually impossible to observe Venus's surface, meaning that the planet presents a bland and largely featureless disk.

The table below lists apparitions of Venus around the year 2022, computed from NASA's DE430 planetary ephemeris. To show events around other years, use the control below.

Apparitions of Venus around 2022

Because Venus's orbit lies closer to the Sun than the Earth's, it always appears close to the Sun and is lost in the Sun's glare much of the time. 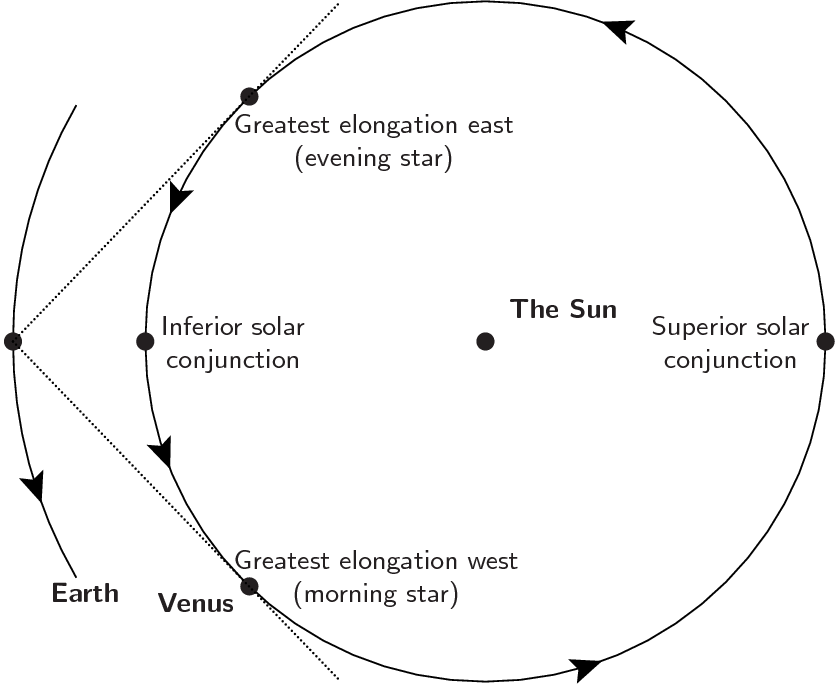 The journey that Venus makes from the evening sky to the morning sky is much quicker than the reverse journey. This is because Venus's orbit is so close to our own, so the points of greatest elongation are much closer to inferior conjunction than to superior conjunction. Click to expand.

At all times, Venus lies close to a line across the sky called the ecliptic. This line traces the path that the Sun takes through the zodiacal constellations every year, and shows the plane of the Earth's orbit around the Sun. Since all the planets circle the Sun in almost exactly the same plane, it also closely follows the planes of the orbits of the other planets, too.

For this reason, the day when Venus reaches its widest separation from the Sun (greatest elongation) is not necessarily the same day when it appears highest in the sky at sunset or sunrise. Venus typically appears highest in the sky a few days or weeks closer to the spring (evening apparitions) or autumn (morning apparitions) equinox than the moment of greatest elongation.

Seen through binoculars or a telescope, Venus's disk is the largest of any of the planets on account of its closeness to the Earth, reaching a maximum size of 66" at inferior conjunction.

Nonetheless, it remains just too small to be discernible to the naked eye. Even through a telescope, it is not possible to resolve any detail on its surface without specialist equipment, owing to the thick featureless cloud layers which surround it.

However, as it orbits the Sun, Venus shows phases akin to those of the Moon, and these are quite apparent even through a pair of binoculars, especially if image stabilised.

Venus was the first planet ever to be visited by a space probe. After a failed Soviet attempt, the first spacecraft to successfully fly past Venus was the American Mariner 2 (1962).

It has since been visited by more than 20 spacecraft, most recently the American Magellan (1989) and European Venus Express (2005).

These have revealed that the planet's surface temperature to be 480°C – the highest average surface temperature of any body in the Solar System, and hot enough to melt lead and to visibly glow red hot. Its atmosphere has been found to be composed primarily of carbon dioxide, with traces of other noxious compounds such as sulphuric acid, which gives its clouds an acidic yellow hue.

These extreme climatic conditions are less a result of Venus's proximity to the Sun, and more a result of the greenhouse effect: Venus has the strongest known greenhouse effect of any body in the Solar System. Current thinking is that the Earth and Venus may have been very similar planets at the time of their formation, but that a point of divergence came early in their history, when oceans formed on the Earth, allowing carbon dioxide to dissolve in the water and become locked up in carbonaceous rocks such as limestone (calcium carbonate). On Venus, this process never happened, and most of its carbon remains in the form of carbon dioxide in its atmosphere.

Never attempt to view Venus through a telescope or binoculars if the Sun is still above the horizon. A momentary glance at the Sun through such an instrument is sufficient to cause permanent blindness.