Saturn will reach opposition, when it lies opposite to the Sun in the sky. Lying in the constellation Sagittarius, it will be visible for much of the night, reaching its highest point in the sky around midnight local time.

The panels below show a comparison of the apparent size of Saturn when seen at opposition in 1990, and when it is most distant from the Earth at solar conjunction.

A comparison of the size of Saturn as seen at 1990 opposition and at solar conjunction.

Saturn will be angled to show its northern hemisphere at this opposition, and the rings will inclined at an angle of 23° to our line of sight, which is almost the maximum inclination they can have. This means they will be very well presented. 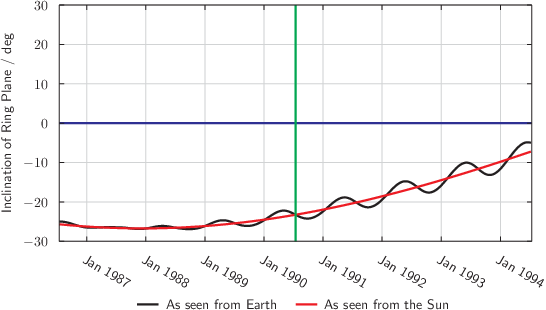 A chart of the path of Saturn across the sky in 1990 can be found here, and a chart of its rising and setting times here.

At the moment of opposition, Saturn will lie at a distance of 8.99 AU, and its disk will measure 18.5 arcsec in diameter, shining at magnitude 0.1. Its celestial coordinates at the moment it passes opposition will be: