Roughly 13–14 times each thousand years, Venus passes directly in front of the Sun, casting a black silhouette in front of the solar disk for a few hours. Such a transit will occur on 8 June 2004, lasting from 01:13 until 07:26 EDT.

Between those times, the transit will be visible from anywhere on Earth, providing the Sun is above the horizon, including from Africa, Oceania, Asia, Europe and Northern America.

Venus last transited the Sun in December 1882, and its next transit will be in June 2012.

The simulation to the right shows the path that Venus will take across the Sun's disk, drawn to scale. The Sun is more than 100 times larger than Venus, and so the latter appears as a small black dot in comparison to the Sun's disk.

By default the simulation is drawn with respect the local vertical in Ashburn (Zenith up), matching how the Sun would appear when viewed through some suitably filtered telescope or a solar projection unit. Viewing the Sun through any optical instrument is incredibly dangerous, however, and tips for doing so safely are given below.

Selecting the option Diagram of Venus's path will produce a static display of the Venus's path through the course of the transit.

The lower panel of the simulation shows the Sun's position relative to the local horizon in Ashburn.

Venus orbits the Sun once every 225 days, completing each revolution around the Sun in around 7–8 Earth months. Since Venus orbits the Sun more quickly than the Earth, it occasionally overtakes the Earth in its orbit, and at such times the two planets lie side-by-side in their respective orbits.

This alignment is called inferior solar conjunction and occurs once every 584 days (roughly 19 Earth months) – a period called Venus's synodic period. It takes place as Venus moves from the evening sky into the morning sky. Even though Venus invariably passes very close to the Sun at these times, it rarely passes exactly in front of the Sun's disk.

Venus orbits the Sun in a slightly different plane from the Earth: its orbit is tipped up at an angle of 3.4° relative to Earth's orbit. The diagram below show this inclination of Venus's orbit (not drawn to scale), with a grid representing the plane of the ecliptic – the plane in which the Earth orbits in Sun. 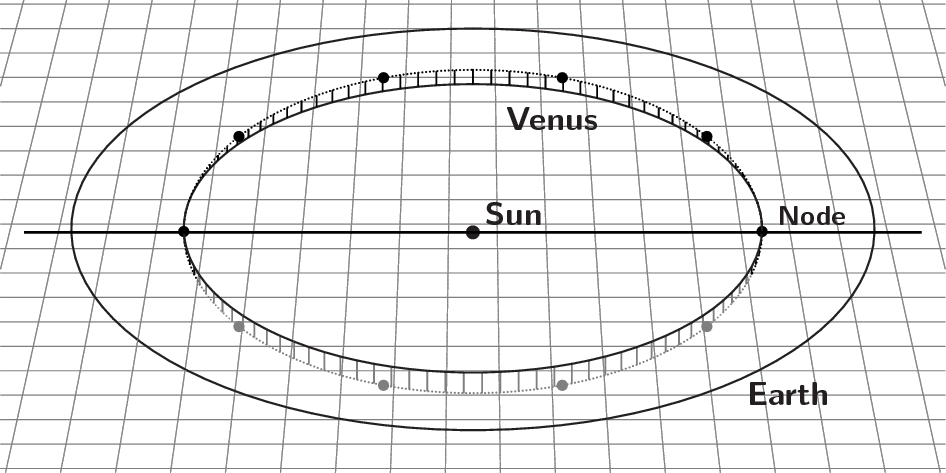 Venus spends much of its time significantly above or below the plane of the Earth's orbit, and at such times it cannot pass directly in front of the Sun. If it passes inferior conjunction at such a time, it will appear to pass to the side of the Sun.

Venus can only pass in front of the Sun if it passes inferior conjunction while it is also very close to the Earth–Sun plane. It crosses through this plane twice on each orbit around the Sun, roughly once every 112 days, at the points on the left and right sides of the diagram above. These points are called the nodes of Venus's orbit.

The nodes of Venus's orbit lie alongside the points along the Earth's orbit that as pass on around June 7 and December 9 each year. Consequently, transits of Venus can only ever occur within a 1–2 days of these two possible dates.

This requirement for Venus to pass one of the nodes of its orbit at the same time that it also passes inferior conjunction is met on average only once every 75 years, though transits do not occur at regular intervals.

Each time, Venus can be seen to pass in front of the Sun from any location where the Sun is above the horizon at the time.

Venus is a much larger and closer planet than Mercury, and casts a much larger silhouette than is seen when Mercury transits the Sun. At inferior conjunction, Venus measures almost an arcminute across, about a thirtieth of the angular size of the Sun.

As a result it is just about possible to see Venus without any magnification, provided you look through a suitable solar filter. A bit of magnification, however, will make the planet much more apparent.

It is vital to emphasise that the Sun is dangerous object to observe. Viewing it through any optical instrument – even a pair of binoculars or the finderscope on the side of your telescope – can cause instant and permanent blindness. Even looking at it with the naked eye can cause serious eye damage unless a suitable filter is used.

Transits of Venus do not occur at evenly-spaced intervals, but commonly occur in pairs separated by eight years. These pairs are typically followed by intervals of 105.5 or 121.5 years. The position of Venus at the moment of closest approach to the centre of the Sun's disk will be: