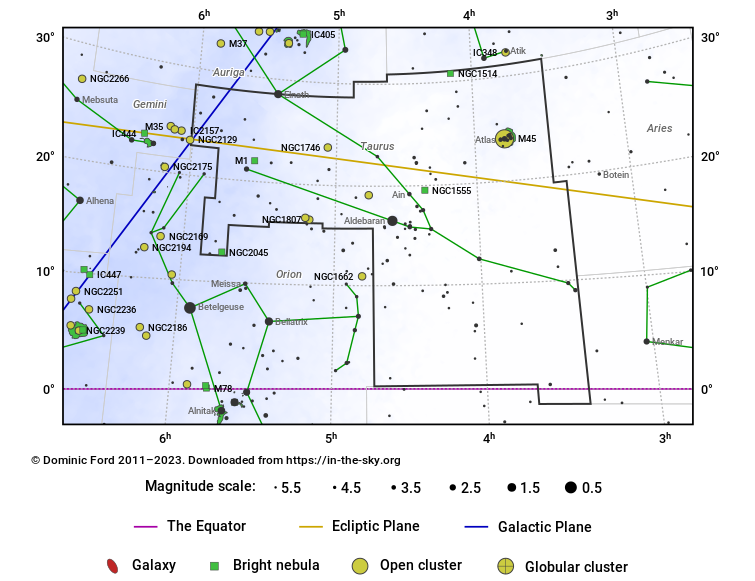 Taurus is a prominent northern constellation, lying immediately north-west of Orion. It is highest in the evening sky in the months around December.

Two objects in Taurus stand out to the unaided eye: the bright star Aldebaran, the thirteenth brightest in the whole sky, and the Pleiades star cluster (M45). The Pleiades is one of the brightest of all open clusters, visible to the naked eye as a smudge. In ancient times it was known as the ‘seven sister’, though only six stars are actually visible without optical aid.

Aldebaran itself lies within another bright star cluster, the Hyades cluster which forms a V-shape.

Taurus is depicted as a bull, within which the Hyades cluster forms the bull's head. North-east of this, the stars β-Tau and ζ-Tau mark the tips of the bull's horns. Close to the bull's right horn lies another remarkable deep sky object, the Crab Nebula (M1), which is the remnant of a supernova explosion seen by Chinese observers in 1054.

The association of Taurus with a bull predates Greek mythology, and the Sumerians linked the bull with Orion, supposing the hunter to be facing the charging animal. In Greece, however, Orion was associated instead with the two hunting dogs Canis Major and Canis Minor, in pursuit of the hare Lepus. Instead, according to some accounts, Taurus perhaps depicted Zeus, who took the form of a bull in order to abduct Europa.

Taurus is one of the twelve zodiacal constellations, and the Sun passes through it each year between mid-May and mid-June. 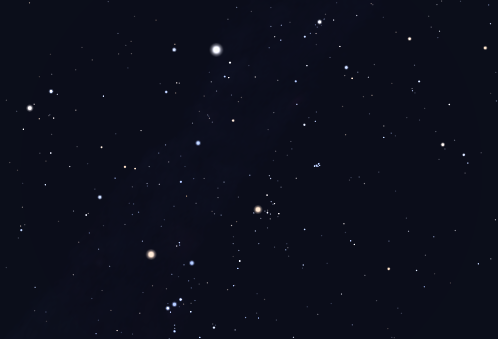 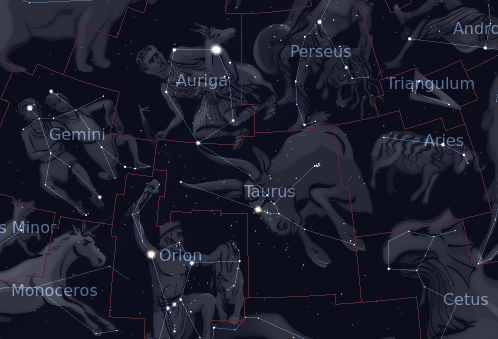 The constellation Taurus as it appears to the unaided eye. Roll mouse over to see labels.
Source: Stellarium.